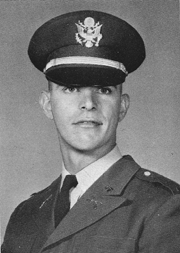 Number of Years of Service: 20 Years

Summary of Assignments: Frank had 9 years of enlisted service (motor sergeant) prior to attending OCS. After graduating he was sent to Germany, where he served as a Battalion Motor Officer and then as a Company Commander, with the 3rd Armored Division. He then went on to Language School in Monterey, California and then to Vietnam. In Vietnam, he was assigned to MACV and worked with the Australians on MATTS Teams, which armed and taught the mountain people how to defend themselves and their villages. He spent time with the 100th Infantry Battalion in Hawaii. He returned to the Officer’s Career Course and while at Ft. Benning, he attended Airborne School and Ranger School. He was the Honor Graduate of his Ranger Class. Frank spent the later years of his 20 year career at the Transportation School at Fort Eustis. Throughout his career, he commanded three Infantry Companies, had Battalion Staff positions as S-3, S-4 and Battalion Maintenance.  At the 7th Group at Fort Eustis, he was Assistant S-3 and S-1 and later a Tactics instructor at the Transportation School.

Jobs/Profession following military: Worked for three major trucking companies.  Positions held were Director of Terminals, Director of Recruiting and Director of Personnel. Retired in July 2003 in Tulsa, Oklahoma. Moved to Las Vegas in March of 2009 where his son lives. My son (my golfing buddy) is a computer science major from Tulsa University and works for MGM Grand Hotel in Las Vegas in their Technical Support Center.