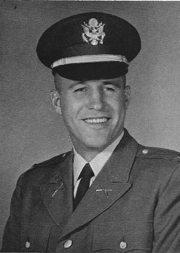 Summary: Following OCS, Larry was assigned to the 2/39th Infantry, 9th Infantry Division at Fort Riley, Kansas. He participated in the training and build-up of the 9th ID and deployed with the 9th to Bear Cat, Vietnam. He was the first Platoon Leader of the Recon Platoon, 2/39th in combat. He later served with the 25th Infantry Division on a 2nd tour in RVN and was awarded the Silver Star.

Following is an excerpt from the “Tropic Lightning News” published by the 25th Infantry Division:

Fire Support Base Crook, June 7, 1969 – During two nights of deadly close-in fighting, Bravo Company of the 3d Battalion, 22nd Infantry, turned back two NVA regiments. In two separate back-to-back ground attacks, Thursday and Friday nights, on Fire Support Base Crook, eight and a half miles northwest of Tay Ninh City, the out numbered Regulars held firm and killed off the charging NVA. “They were all heroes”, said Captain Larry B. Thomas of Camp Hill, Pennsylvania. Thomas directed his Bravo Company while running back and forth on the bunker line determining where the areas  of greatest threat were. “The men knew what to do before I had a chance to direct them. They performed beyond expectations, and I’m proud of every one of them.” A last-ditch effort was made from the northeast section where the initial attack was fairly light. Machine gunner Specialist 4 Richard C. Marroquine of Floresville, Texas made an immediate assessment of the situation and turned back the on-rushing enemy with his M-60. The desperate NVA answered his volley with a wave of rocket-propelled grenades. But Bravo had constructed their fortifications well.

Larry Thomas died December 7, 2009, at age 71, at the Department of Veterans Affairs Medical Center, Wilkes-Barre, Pennsylvania where he had been a patient.