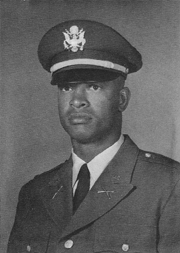 My Military Story for OCS Class 1-66

After completing OCS in January 1966, I was reassigned to the 8th Special Forces Group in Panama as a 2nd Lieutenant, Infantry (XO, HHC).

About a year later I was sent to Viet Nam to serve on an A-Team (A-108, Quang Nhi Province) stationed in I Corps with “Yards” as our support troops. Six months later, I was reassigned as the commander of a Mike Force Company covering all of I Corps operating out of the Danang area (Marble Mountain).

I returned to the States in 1967 as a 1LT Company Commander of a Basic Training Company at Ft. Bragg, NC. After being promoted to Captain, I became the Battalion XO.

In 1968 I received a Branch transfer to the Military Intelligence Branch. Upon completing the Counterintelligence Basic Course at Ft. Holabird, MD, I was assigned as Commander of the Pittsburgh Field Office, 109th MI Group.

After about a year in Pittsburgh, PA I was assigned to the DLI, Ft. Bliss, TX to learn the Vietnamese language in preparation for another one and a half years in Viet Nam as a member of a Phoenix Team operating in Binh Dinh Province.

Upon returning back to the States in 1971 I attended the MI Officers Advanced Course at Ft. Huachuca, AZ. Followed by a stint at Georgia State University, Atlanta, Georgia to obtain a Master’s Degree in Business Information Systems.

While serving as the Transportation Center Information Systems Officer, Ft. Eustis, VA, I was promoted to Major. Now it was time to learn another language in preparation for a tour in Germany (1977-1980) as the XO of a Special Security Detachment in Heidelberg and later as the Commander of the Special Security Detachment at Field Station Augsburg.

Returning to the States in mid-1980 I was assigned to the US Army Concept Analysis Agency, Bethesda, MD. I was promoted to LTC in 1981.

My final assignment was in the Pentagon serving on the ACSI staff as an Automated Systems Engineer from which I retired in July 1984.

The entire 22 years of Service were filled with trials and joys. But through it all I was constantly reminded of my days as one of Cady’s Tigers. The pushups and runs instilled in me a sense of duty and responsibility (even swinging on the beds to avoid walking on the barrack floors in my room).

I thank you’ll for continuing to carry the torch of unity and friendship. One day soon I‘ll return to Ft. Benning for something other than a hardship tour (jump school and OCS).