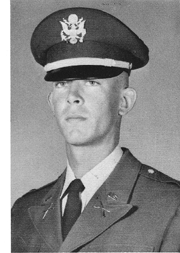 Summary of Assignments: Following OCS, Gary took a branch transfer to Armor and went to Fort Knox, Kentucky for Armor Basic and a motor officer’s course. He was then stationed at Fort Knox as a platoon leader, motor officer and a HQ Company XO. To get out of Fort Knox, Gary volunteered for Vietnam and spent a tour as an advisor in the Mekong Delta. He was the assistant operations officer for Phong Dinh Province in Can Tho City for six months and served as an assistant district advisor and then district advisor in Phong Dien District. He went through Tet ’68.

Gary returned to the states and entered college. He joined the National Guard in ’69 and commanded two infantry companies and was also the S3 for several years. In 1976, he joined the Army Reserve and commanded a tactical psyop company for a couple of years.