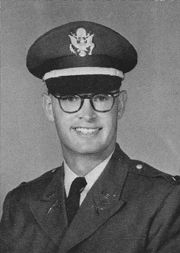 Summary of Assignments: Following OCS, I went to Fort Knox for Armored Officer Basic and then to Germany, 2/3rd Armored Cavalry Regiment from May 66 to Sept 68. I went to Vietnam in October 68 assigned to the 44th Special Tactical Zone, IV Corps as an advisor. Returned to the States in November 69 and attended the Armor Officer Advance Course. I stayed at Fort Knox as XO of the CONARC NCO Academy/Drill Sergeant School and then taught until departure for Germany again in 1972 to the 2nd Brigade, 3rd Armored Division in Gelenhausen. I had several jobs:  Brigade S-3 Plans, Armor Company Commander, Battalion S-4, Battalion S-3 until returning to the States in 1976. They changed my orders from Fort Hood to Fort Gordon while I was on leave. It was hard to understand why I was being assigned to the Signal School. It was because they had started Basic Training there. I was Battalion XO and then Brigade XO as the training was expanded.  Left that job for a Commander’s special: I was the Armor School LNO and the leader for the survey team. I left for Egypt in October 1982 and worked at the embassy as the Egyptian Army ground systems LNO. I then went to Fort Monroe in November 1983 as Chief of Testing and Development. I left there in October 1986 for Vermont as advisor to an Armor Brigade. I retired in 1988. I rarely ran into anyone that I knew since I went into the Armor Branch.

Jobs/Profession following military: I had a paint and repair contracting business for 8 years in the Tidewater area of Virginia, traveled in a motor-home for two years and have been selling real estate here at Snowshoe since 1998. I am about to retire again. I sold my large place here and bought the one in Hedgesville.

Current hobbies/interests: I have had 5 heart attacks since 1989. I now have two stents and hope this last procedure lasts as long as the first (10 years). I don’t miss the military as much as I miss the lifestyle. Hard to realize the difference until you have to experience it. I purposely did not take a “beltway bandit” job when offered. They all wanted me to move and travel. I was ready to stop doing that. I really enjoyed having my own company. Work when and where I chose and for whom I chose. I could play golf on the way to a job if it was too nice a day to pass up. I made far less money but in the long run I have done ok.