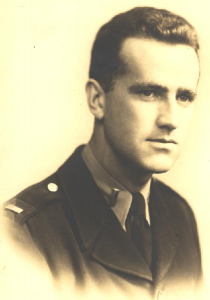 Summary:  Frank graduated from Infantry OCS, Ft Benning, Georgia in 1943.  After graduating from OCS, Frank was assigned to the 406th Infantry Company, 106th Division, and sent to Camp Shanks. From there he went to England where he trained Replacement Units. He was attached to Patton’s Third Army, served as a Provost Marshal in France and participated in the Battle of the Bulge, among others. He was one of the commanding officers liberating concentration camps.

After the war, Captain Long worked for US Steel near his home town of McKeesport, Pennsylvania until the plant closed.  He became a Tennis Pro in Riverdale, New York. He has been editor of a small town newspaper, a buyer for Burdines Department Store in Florida until it closed, and a buyer and inspector of computer parts for Burroughs Corporation. After retirement, he was the head scorekeeper at Chris Evert’s Celebrity Tennis Tournaments. Today he enjoys life with his wife in an independent living apartment in Coral Springs, Florida, where he celebrated his ninetieth birthday in July of 2009. 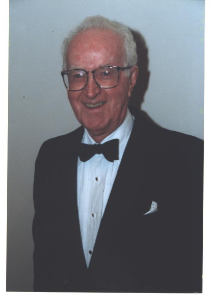