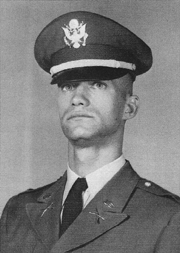 Summary: After OCS, was assigned to the 5th Special Forces and went to Vietnam in 1966. Spent a year in Vietnam and subsequently had several follow-on assignments with the Special Forces. Attended the Career Course at Fort Huachuca, Arizona and later served in the Recruiting Command in Boston. While there, attended law school at night. Following army retirement in 1980, he has been practicing general law. He is planning on retiring next year.