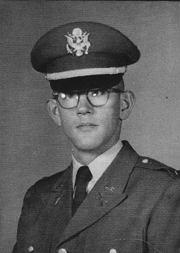 Jobs/Profession following military: My second career was in Law Enforcement, I worked for the Fairbanks Police Department for 15 years, patrolman to Chief of Police, then got involved in Politics, worked as Special Assistant to the Commissioner of Public Safety.  Retired from State of Alaska in 1994.

My military career started in Detroit, Michigan when I joined the Army on February 1, 1957. I took basic and AIT at Fort Benning, then went to Schwienfurt, Germany for three years with the 3rd ID. Met my wife there and married in 1960. We are still together 59 years later. Had tours at Fort Knox, Fort Dix, Korea, and Fort Ord, during my 9 years of enlisted service.

Off to OCS in 1965 in kind of a funny way. I was teaching at the Drill Sergeant Academy and SSGT Lipscome, another instructor, wanted to go to OCS. On the way to lunch we stopped at personnel so he could get the paperwork started. The personnel sergeant took my name and filled out the paperwork for both of us. I got to go and Lipscome did not.

Arrived back at Fort Benning early in July of 1965 and met up with Harold Graves, with whom I would continue a 53-year friendship. I was assigned to the 4th Platoon with 1Lt Tom Stephens as our TAC. What I most remember about those six months are how the 51st Company pulled together as a fine unit and set standards that have never been exceeded by any other OCS class.

Early in OCS they took us to the Leadership Reaction Course. The group I was assigned to successfully completed all the stations and was awarded with full seat privilege on the chairs in the mess hall along with a trophy. What they did not know was I taught that course at the Drill Sergeant Academy.

My first assignment after graduating from OCS was teaching at the Infantry School where my boss was Captain Colin Powell. What a great mentor. Then to Vietnam as a platoon leader, 1st of the 5th Mech, 25th Division. Six months into the tour, I was sent to the Americal Division as commander of the Replacement Detachment. Next was Fort Gordon as a basic training company commander, B/1/16. Then I was sent back to Vietnam as an adviser in Kontum with the Montagnards. After going through the career course at Benning, I completed the bootstrap program at Nebraska/Omaha.

Next, I went north to Alaska with Colonel Jay Kitterman who I met in Omaha and was made S3 of the 172nd Light Infantry. While in Alaska, I branch transferred to the Military Police at Fort Wainright in Fairbanks. There I served as company commander for the 472nd MP Company and later was the operations officer.

My final assignment was at the Anniston Army Depot in Alabama. Then I returned to Alaska for 20 years. I started as a teamster on the pipe line and later joined the Fairbanks Police Department where I went from patrolman to chief in 5 years. My final employment was as head of Airport Safety and Security for the State of Alaska before retiring in 1994.

Editor’s note. Gene is probably one of the few candidates who can say they had the same First Sergeant (Strickland) in both basic and OCS in addition to the same First Sergeant (Moraius) in Vietnam and Korea. After retiring in Alaska, Gene moved to Goodyear, Arizona where he lives with his wife, Irmie. They have three children and two grandchildren. In his retirement, Gene enjoys golf, scuba diving and traveling in his RV.

I arrived in at Fort Benning GA a few days prior to our starting date to insure I had everything needed to start OCS. While doing so I met Harold Graves and Jerry Fry who  were also headed to 51st company.

Upon checking in on a very hot day, I was not as prepared as I had thought because thanks to LT Cerone, my E-6 stripes had to be removed by chewing them off. I was also introduced to the sawdust pit by LT Pulliam. The experience was not what I expected. After several more stops by cadre members I reached my two-man room on the 3rd floor which was shared with Candidate Orr.

As you all know, those first few weeks where at best, life changing, as we tried to find our way. Total confusion, double timing everywhere, pull-ups, four inches sitting on the mess hall chairs, formations, pushups, sleeping very little and keeping rooms neat and clean. But we teamed up and life became better. We lost several classmates the first few weeks, but the group of some 170 individuals quickly grew to a working team.

Paul Ferguson led us with his cadence calls on the way to training each day. The chain of command changed often. I remember one time when we had just returned to the 51st Company area and Captain Cady was standing on the steps and announced that the whole chain of command was relieved. Boy-o-boy, I was the platoon leader of the 4th Platoon and the company was getting ready for an IG inspection. I thought “this is good.” I could now be just be a candidate. Captain Cady then shouted, “The new company commander is Candidate Mahler.” I did not move. After two additional announcements, LT Stephens advised me to move out with a boot to the rear.

Remember returning from a day of training to find your room destroyed by the TACs during their daily inspections? And those runs with steel pots and no helmet liner while wearing ponchos? And going through the obstacle course? I helped Candidate Medlen over the tallest obstacle. Years later when I was being moved by chopper out of a hot spot in Vietnam, the pilot was Mike Medlen.

Other memories include the construction of the 51st Company monument to honor COL Nett, I carried rocks from the river in my car and broke the shocks in my new 66 Chevrolet. But each platoon took part in a team effort and the monument still stands today. And the pogey bait parties. I remember the time on a weekend when we had the pizza’s placed in a dumpster. We also had pizzas brought in from the roof and got caught by the TACs. That’s when we had to eat pizzas in the shower while in the front leaning rest position with the cold showers running. Cokes were stacked in the hall and we went sliding trough them.

How about Blue Day with Hal Graves as commander of troops strutting across the parade field and our class passing in review. The Senior Status Formal at the O-Club with dancing, drinking and feeling we were close to the gold bar. Then graduation day on January 14, 1966 at Infantry Hall with family, wives, kids, and most of all, the Candidates of Class 1-66.

WE SET THE STANDARDS. Many went on to very successful careers in military and civilian jobs and were leaders in both fields.

God bless each of you and our fallen comrades.