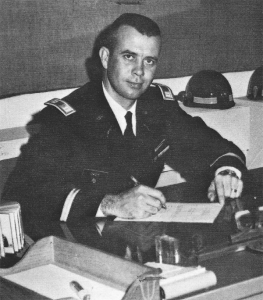 Summary of Assignments: Major Cady was born in Venice, California in 1934 and raised in Glendale, California. He joined the U.S. Marines in 1951 at the age of 17. On completion of Basic and Advanced training was assigned to the 1st Air Naval Gunfire Company, Fleet Marine Force Pacific in Hawaii with further assignment to Korea. He was discharged as a Staff Sergeant in 1956.

He joined the U.S. Army in 1961, attended and graduated from OCS class 4-61 in September, 1961. as a new 2nd Lieutenant he was assigned to the 1st Battalion, 54th Armored Infantry in Europe, initially as an Infantry Platoon Leader, then Scout Platoon Leader, S-3 Air, Rifle company Executive Officer, then Rifle Company Commander. Unit was designated 1st Battalion, 4th Infantry. On completion of overseas tour was promoted to Captain and assigned in September 1964 to 5th Student Battalion (OCS) at Fort Benning, Georgia as 51st OCS Company commander, graduating three OCS classes (5-65, 1-66, 110-66).

Reassigned to U.S. Army Vietnam in 1966-1967 as an infantry adviser to a Special Mechanized Strike Force and Special Actions Group. Promoted to Major at Fort Benning, Georgia in November 1968. After a short assignment as S-3 and Executive Officer of the 3rd Brigade. 5th Mechanized Division at Fort Carson, Colorado, received orders and in July 1969 was assigned to the 1st Cavalry Division (Air Mobile) in Vietnam. Initial assignment as Commandant of First Team Academy (Division Replacement and Training Unit), next as Battalion S-3 of the 1st Battalion, 7th Cavalry and operated throughout II Corps region and Cambodia.

Reassigned to CONUS from Vietnam, attended degree completion program (1970-1971) at the University of Nebraska, Omaha with further assignment to Recruiting Command as both Recruiting and AFEES Commander in Alaska. In 1974 was reassigned to Fort Benning as Project Officer in Directorate of Combat Developments. During that assignment was hospitalized for two years at Martin Army Hospital for post Vietnam surgery. Retired upon release from the Martin Army Hospital in December 1976.

Post Army Retirement: Worked for Business Junior College as Vice President of Operations and Director, later relocated to Houston, Texas and worked for Brown and Root as Project Manager of Western Hemisphere, Latin American Marine, dealing with offshore drilling, platform and production facilities. Owned a Golden Corral restaurant in Tifton, Georgia. In 1985 went to work for the U.S. Army as a civilian project officer in the Directorate of Combat Developments at Fort Benning, Georgia. He was later given the opportunity to go overseas to Japan as Chief, Plans and Operations, DCSLOG, USA Japan/IX Corps. Upon completing over five years in Japan, returned to Fort Benning for retirement in 1995. From 1996 – 2002 worked as project manager for a general contracting firm in the construction of commercial buildings.

Post Retirement Activities: Former wife of 49 years was Martha J. (Jean) Cady, who died in 2006. We had three children, all married and five grandchildren and two great grandsons. Married Francis O. Cady in June 2007. Fran, my new bride, retired from the U.S. Government as Chief, Defense and Reutilization Office at Fort Benning, Georgia and has had many exciting assignments such as Panama, Puerto Rico and Iraq, at a place called Anaconda, where she was responsible for over 25 acres of damaged and destroyed military vehicles and equipment. Fran retired in 2007 and we were married shortly thereafter. Fran and I are Ballroom Dancers, busy dancing three or four nights each week. We love to travel in our RV and visit with friends and family. 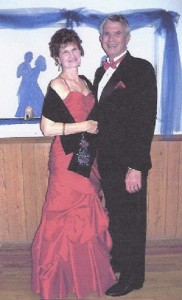