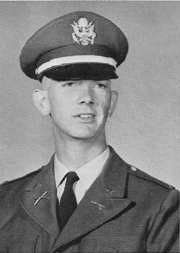 Summary: Following OCS, was assigned to the 42nd Scout Dog Platoon, which deployed to Vietnam and was attached to the 1st Brigade, 101st Airborne Division. He caught malaria and was medically evacuated after 8 months in Vietnam.  He was later assigned to Headquarters, USARV. He later commanded a BCT Company at Fort Bragg, North Carolina and went through Airborne School at Fort Benning, Georgia. On his second tour in Vietnam, he was assigned to the 173rd Airborne Brigade. He later attended the Officer’s Career Course at Fort Benning and had a ROTC assignment at Washington  & Lee University. While there, he obtained his Masters Degree at James Madison. His final assignment was at Fort Bragg, where he was Chief of Educational Development at the PsyOps School. He got out of the Army in 1977 and joined the Army Reserve and later retired with the rank of Major. He then bought an H&R Block franchise and later sold it.  He is now retired. He noted that he recently broke a hip which has kept him from riding his motorcycle. Other than getting older, he is making a recovery and noted he is in good health.