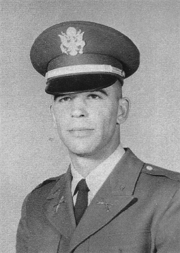 Jobs/Profession following military: John was forced into medical retirement in 1979 because of his combat injuries. This did not stop John from “Getting Involved” with veterans immediately. He also kept very involved with his first love children and served on the District Council of Boy Scouts in North Carolina for over 10 years and volunteered each summer as a Counselor or Director for scouting and youth summer camps on Fort Bragg, North Carolina. In 1979-80 John set up the First Special Olympics in Central North Carolina and personally managed and supported the Special Olympics effort for three years and was honored for his very special effort.

John has worked tirelessly for over 35 years, day and night, 7 days a week helping veterans and their dependants since his retirement. He literally dedicated his life to veterans advocacy after he left military service. He has spearheaded programs as the chairman, co-chairman, president, and mind-trust or has sat on boards of directors in efforts to support veterans, veteran health care, veterans programs, veterans’ legislation and events. He has advised local, state and federal politicians and bureaucrats on veterans and veterans affairs, veterans health care and legislation for almost 35 years.

He is a member and has sat on the board of directors of the regional Retired Officers Association (TROA) in Northern California for over 15 years. He is the past chairman of the Board of Victory Ensured Through Service, (V.E.T.S.), a philanthropic veterans organization that supports veterans hospitals and projects in Washington State, Oregon, Arizona and California that has donated over $1,500,000.00 to veterans in the past 14 years.

John is the past president of the Shasta County Veterans Affiliated Council (SCVAC), which represents 64,000 veterans and dependants in Shasta County,  California and 38 veteran service organizations and women’s auxiliaries.

He is the founder and first chairman of the board of the Northern California VA Health Care System Advisory Council which represents the 16 Northern Counties of California as far as veterans health care is concerned. This is a geographical area the size of the State of Ohio.

John was very instrumental in getting a Veterans Administration outpatient medical clinic in Redding, California, and in 1990 co-wrote the proposal for a new 50,000 square foot full service VA OPC in Redding CA. This became a reality and is now serving veterans from all over Northern California.

He also wrote the concept and started the legislative quest for a veteran’s cemetery in Northern California in 1988 so our American heroes could be buried with dignity. This effort of almost two decades turned into reality when the Governor of the State of California signed legislation that would put the first State Veterans Cemetery in California in Shasta County.

John and his collaborator in this effort designed a plan to insure at least 10 similar state cemeteries in California would be constructed so no family member would have to travel more than 75 miles to visit a grave and honor their loved ones.

This state veterans cemetery is now constructed and has 165 acres of land. Its cost to the federal government was over $7 million dollars to build. He also helped to establish the California Veteran’s Cemetery Association (CRVA) to serve “ALL” veterans in California;  noting that California has over 4 million veterans.

John then wrote the concept and personally met with U.S. Secretary of Veterans Affairs Anthony J. Principi trying to get the VA to build a 50 bed VA hospital in Northern California. This was not approved, but instead the VA went with his plan “B” and made a contractual agreement with one of the local major medical centers for a $2 million dollar annual project to care for “Emergency Care Veterans”.

John wrote the concept and later the proposed legislation (he was the sponsor of CA SB4) for a California veterans home in Northern California. This legislation included a 500 bed facility with an alzheimer’s wing. Then he championed this project through two state gubernatorial visits and town halls and finally the signing into law by the Governor of the State of California. This veteran’s project is estimated to cost $70 million dollars and is due for completion in 2011.

John was President H.W. Bush’s local chairman for America’s Welcome Home Celebration for our Gulf War Veterans on July 4, 1991. John was also the American Legion’s Representative on the “National Gulf War Celebration” in 1991 and by proclamation the City of Redding’s Chairman for this event. This veteran’s project resulted in a celebration of over 20,000 attendees in Redding, California on July 4, 1991 honoring our Heroes from the Gulf War. He raised the money to have a stone and bronze plaque place in the local Veterans Memorial Grove honoring the Gulf War Veterans.

John has worked with famous people to help in honoring veterans. In 1989 and 90 John worked with country music legend Merle Haggard in planning and executing a Western Regional and then a National 100% Combat Disabled Fishing Tournaments for Veterans on Lake Shasta, California sponsored by Mr. Haggard. Most of these men were double amputees and some were blind or paraplegics. Most had never fished since they were wounded.

John is also very involved with veterans affairs in some of our nation’s most prominent fraternal organizations. He was the Co-Chairman of the ELKS National Veterans Service Commission and is also very active in veterans affairs in his Masonic Lodge. John was the chairman, co-chairman and advisor for the Shasta County Veterans Day Parade for eight years. He chaired the Memorial Days services for many years in Shasta County after the services were stopped at Shasta College in 1994 by a radical liberal movement.

John felt he could not do enough to help veterans especially when it came to “Legal Help.” No one wanted to do any “Pro Bono” work for his needy veterans, so John went back to college and at age “62” graduated with a degree as a Legal Assistant just so he could help veterans with their legal problems. I might note that John has served in all capacities listed above as an unpaid volunteer.

Last but certainly not least John’s family has been involved with Special Forces, SFA, volunteerism and veterans affairs for many decades. John’s first wife Sally was a long time civil servant who worked at JFK Center and passed away of lung cancer. His current wife, Doris, has been by his side and assisted and encouraged him for over 25 years.

His son John E. Cleckner II served in Special Forces for 14 years (SF Medic) assigned to the 7th SFGA. John II has had 40 deployments during this time in SF and Air Forces SOF and was awarded the Combat Medical Badge (CMB) in Panama. John II is a Decader and Life Member of SFA. Captain John E. Cleckner II is currently assigned to Air Force Special Operations at Hurlburt Field, Florida and has deployed to Iraq and just recently returned from a Philippine, and Afghanistan deployment. John Sr. currently has a son, a great grandson and three very close nephews deployed.