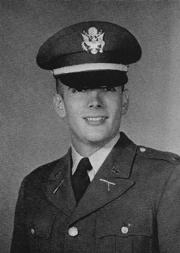 Civilian/Military Schools & Degrees: Tom is a graduate of the Army’s Psychological Operations Advanced Course and the Army’s Command and General Staff College. He retired from the Army in 1996 with the rank of Colonel. Tom received his undergraduate degree with a major in Psychology from the University of Wisconsin-Milwaukee in 1970. He received his Masters Degree in Banking from Golden Gate University in 1977.

Summary of Assignments: Tom is originally from Milwaukee, Wisconsin and was drafted into the Army in November 1964. He received his commission as an Infantry Second Lieutenant at Fort Benning in January 1966. He also earned his Airborne Wings and Ranger Tab while at Fort Benning. Tom’s first assignment was with the 9th Infantry Division. He was awarded the Combat Infantryman’s Badge during his tour as a Recon Platoon Leader with the 9th Infantry Division in Vietnam. Tom extended his tour in Vietnam to become the Detachment Commander for the 222nd Aviation Battalion, where he earned his Pathfinder badge. Tom left active duty in 1968 to return to school. He joined the Army Reserve that same year.

Jobs/Profession following military: Tom started his banking career in 1970 at Continental Illinois National Bank and Trust Company of Chicago. In 1974, after initial management assignments in the Remittance Banking Division and the International Banking Division, Tom was selected to attend the bank’s credit training program and had his request for a transfer to California approved. When he was due to rotate back to Chicago in 1979, Tom joined Crocker National Bank in Los Angeles as a Business Development Officer in the International Division. He went on to lead the Operations Group and later was promoted to be the General Manager of the Los Angeles International Banking Office. In 1984, Tom was recruited by Citicorp to be its City Administrative Officer. In 1990, he was called back to active duty for 12 months for Desert Storm. He later started his own very successful business, sold it and joined Pacific Coast Bankers’ Bank in 1998 as a Relationship Manager. Tom was promoted to Director of Marketing in 2000 and to President and CEO in February 2003. He retired from the bank on February 29, 2008.

Current hobbies/interests: Tom lives in Marina del Rey, California with his wife, Mona, who is a Dietitian and retired Army Major. Tom and Mona do not have any children. In retirement, Tom serves as a director of a local bank, teaches financial literacy at the local Boys and Girls Club and is a part time professor at DeVry University, where he teaches a graduate course in Marketing. Tom is also an avid golfer and Texas Hold’em player. Tom and Mona enjoy traveling to visit far away places, family and friends.

Editor’s introduction. Tom Evans, or “Ranger Tom” as he is known on his email address, led the way when it came to members of his class being inducted in the OCS Hall of Fame. He was the first to receive that honor (he would be followed later by nine classmates from OCS Class 1-66.) Before he tells his story, we need to go back to November 1964 when after being drafted in the army, Tom was sent to Fort Knox, KY for basic training where his leadership potential was recognized when he was made a platoon guide. He then went to Fort Gordon, GA for advanced infantry training (AIT.) After completing AIT and while waiting for his OCS class to start, Evans was assigned as a bus driver for a WAC company (not a bad job for an army private.) He must have done a good job as he was the only male invited to attend the WAC unit’s annual birthday party.

Arriving at Fort Benning in August 1964 to begin OCS, Evans learned his 2nd Platoon tactical officer would be LT Daniel Cerone and his roommate was Pete Conaty. They would remain roommates during their time at OCS, go through Airborne School together and then Ranger School where they would be Ranger buddies. They became lifelong friends and Conaty would follow Evans as a member of the OCS Hall of Fame.

Evans has said attending and graduating from OCS was the “defining experience of his life” and without OCS, he never would have achieved the success he enjoyed in his military and civilian careers. As a result, he has been “giving back” big time. When an effort was started in 1996 to locate classmates who had graduated 30 years earlier, Evans was able to find every living member of his OCS platoon. (James Godsey and Edward Fisher had lost their lives in Vietnam.) When Evans joined the Board of Directors of the OCS Alumni Association, he was named treasurer and used his banking skills to bring organization to the Alumni Association’s finances He used his own funds to help install a paver honoring eleven OCS classmates and one tactical officer lost in Vietnam and another paver dedicated to his Vietnam unit, the 9th Infantry Division. Tom Evans will always be an Old Reliable, an Army Ranger and a proud member of OCS Class 1-66. What follows is his story.

Tom is originally from Milwaukee, WI, and was drafted into the Army in November 1964. In January 1966, he was commissioned as a second lieutenant in the Infantry at Fort Benning, GA.  Immediately following his commissioning, he earned his Airborne wings and Ranger tab.  He was awarded the Combat Infantryman’s Badge during his tour as a Recon Platoon Leader with the 9th Infantry Division in Vietnam. Tom extended his tour in Vietnam and earned his Pathfinder Badge while serving as the Pathfinder Detachment Commander with the 1st Aviation Brigade. Tom left active duty in 1968 to return to school to obtain his bachelor’s degree. He joined the Army Reserve that same year. Tom’s assignments included Commander of the 306th Psychological Operations Battalion, Inspector General 63rd Army Reserve Command and Commandant of the 6220th USAR School. Tom’s military awards include the Legion of Merit, the Meritorious Service Medal with three Oak Leaf Clusters, the Bronze Star and the Army Commendation Medal. Tom is a graduate of the Army’s Psychological Operations Advanced Course and the Command and General Staff College. He successfully completed the First Year Studies of the Army War College and was selected to serve as class president. Tom was inducted into the OCS Infantry Hall of Fame in 1990. In January 1991, he was called back to active duty for Desert Storm. In 1994, Tom was selected by the USAR General Officer Assignment Board to serve as Chief of Staff of the 311th Corps Support Command, a Brigadier General on Mobilization position. He retired in 1996 with the rank of Colonel. In April 2019, Tom was awarded the Oder of Saint Maurice in the Rank of Primicerius, in May 2019 he was inducted into the 11th Infantry Regiment as an Honorary Member and in December 2020, he was a awarded the Nett Award by the OCS Alumni Association Board of Directors.

Tom started his banking career in 1970 at Continental Illinois National Bank and Trust Company of Chicago. In 1974, after initial operating management assignments in the Remittance Banking Division and the International Banking Division, Tom was selected to attend the bank’s credit training program and had his request for a transfer to Los Angeles, CA approved. When he was due to rotate back to Chicago in 1979, Tom joined Crocker National Bank as a Business Development Officer in the Los Angeles International Banking Office. He went on to lead the Office’s Operations Group and was later designated a Senior Credit Officer and promoted to General Manager of the Office. In 1984, Tom was recruited by Citicorp to be its Los Angeles-City Administrative Officer. Upon completion of his 12- month Desert Storm tour in Dec. 1991, he started his own business and sold it in 1997. In 1998, Tom was asked to join Pacific Coast Bankers’ Bank (PCBB) as a Relationship Manager. Tom was promoted to Director of Marketing in 2000 and in February 2003 he was selected to be President and CEO of the Bank and Chairman of Banc Investment Group (BIG). He retired from both positions on February 29, 2008.

Tom received his bachelor’s degree, with a major in psychology and senior honors, from the University of Wisconsin-Milwaukee (UW-M) in 1970. He attended UW-M because his father told him “Tom, you can go to any college you can afford to pay for”– no silver spoons in my family. He received his M.B.A. (Banking) from Golden Gate University in 1977.

Tom lives in Marina del Rey, CA, with his wife, Mona, who is a Registered Dietitian and retired Army Major.  In retirement, Tom is focusing on “giving back” to society. He serves as a Director and the Immediate Past President of the United States Army Ranger Association and as a Director and Secretary of the United States Army Officer Candidate Schools Alumni Association. He volunteers with Junior Achievement, where he teaches Economics for Success, Personal Finance and The Company Program.  He also volunteers at the Veterans Administration Hospital in West Los Angeles and the Boys and Girls Club. Additionally, he serves as a Director and Vice President of his HOA and as Chair of the Landscaping Committee and as a member of the Finance Committee. Finally, Tom is a frequent early morning golfer and tennis player. He and Mona enjoy traveling, spending time with family and friends and visiting faraway places (places include the Amazon River in Peru, Egypt, Morocco and the Canary Islands, China & Tibet, Italy, a safari to Tanzania including Zanzibar, a cruise to the Greek Isles with a side trip to Amman, Jordan to visit Petra, a cruise around the British Isles and Ireland and a river cruise from Budapest to Amsterdam.) His most recent trip was to Normandy, France to participate in the ceremonies commemorating the 75th Anniversary of D Day