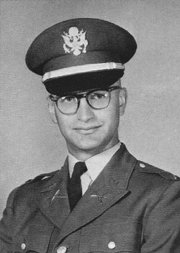 Post from the Vietnam Wall Memorial: “Tony and I were roommates for a time at Ft Riley. He was one of the “good guy’s” and is remembered!” Gary Woodring, November 13, 2008.

“……..1LT Madden distinguished himself by exceptionally valorous actions on 9 October 1967 while serving as the platoon leader of the reconnaissance platoon on a combat operation in the jungles of Vietnam.  As the unit moved through an area of thick vegetation, it suddenly came under an intense volume of automatic and semiautomatic weapons fire from a well concealed Viet Cong force estimated to be of company size.  Seeing two of his men fall wounded in the initial burst of enemy fire, Lt. Madden immediately rushed forward to the soldiers in an effort to move them back to a covered position.  Although exposing himself to a torrent of enemy fire,  Lt. Madden bravely advanced forward, pouring a devastating volume of fire on the insurgents. As he neared the position of the two wounded soldiers, Lt. Madden was struck by a burst of enemy automatic weapons fire and critically wounded.  He was quickly evacuated to a medical facility where he succumbed to his wounds……..”