Summary of Assignments: Following OCS, I was assigned to the 9th Infantry Division and served as Aide de Camp to the Deputy Commanding General, deploying to Vietnam with the command group. I came down with type 1 diabetes and was returned to CONUS in December 1966 and medically discharged in 1967.

I’ve had a varied business career, working mostly in high-tech (computers & communications) from program manager, financial manager, strategic relations. I also founded and was part owner and ran a company called Bio-Control. Bio-Control concentrated on the development of a headset for quadriplegics that would allow them to control a computer with just their head and eye movements and brain waves. Worked in Boston area for 10 years, New York for 1 year, Iran for 3 years, California for 10 years.

All four parents are in their 80’s and 90’s, all with some physical difficulties. I retired and we moved to the Delmarva peninsula in Virginia where I got into Real Estate and building or rebuilding houses. I live on an 18 acre ranch, which is on the water, in a very remote area of Virginia.

After the attack on the World Trade Centers, I joined the Coast Guard Auxiliary and have been active in operations with two boats that are operational facilities. I’m active on the local Habitat for Humanity Board and responsible for financial matters. We’re small but manage to build three new homes a year for our lower income residents.

Our one son is an Ob/Gyn doctor in Seattle and is married with one daughter. 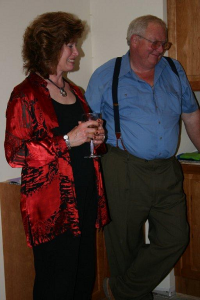