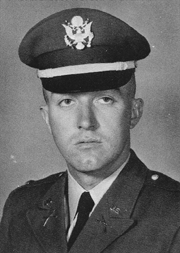 Summary: Bob passed away at the age of 56 in Atlanta, Georgia. He was a Medical Sales Executive and President of Hornak and Associates. He graduated from Marquette University, where he played basketball and golf for the Warriors. As an outstanding senior student athlete, he was awarded the Robert McCahill Award. After OCS he attended Airborne and Ranger schools. He served in Vietnam in 1966 with the 25th Infantry Division where he was wounded in Pleiku. He was awarded the Bronze Star, Purple Heart and other medals. He was a member of St. Philip’s Episcopal Church in Charleston, South Carolina.