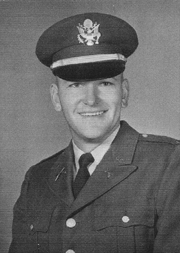 Summary of Assignments: July 1965 Officers Candidate School, Fort Benning, Georgia graduated 1966, then airborne training and special weapons school. Went to Louisiana for 4 months, then to North Carolina for special warfare school and was in Vietnam on 3 October, 1966. Returned from Vietnam on 2, December 1967 and was assigned to Fort Lewis Washington for 1 year as a commander of a company for new inductees in the Army. 1969, went to flight school for helicopters in Texas and Savannah, Georgia.  3 January 1970 was back in Vietnam and flew 950 hours in Combat Missions. 1971, school in Georgia and then November 1971 to Baumholder, Germany and remained there till July 1976. Assigned to Waterloo, Iowa as an Army Advisor to 12 units of the National Guard.

Current hobbies/interests: Keeps watch over his family and friends from a distance.